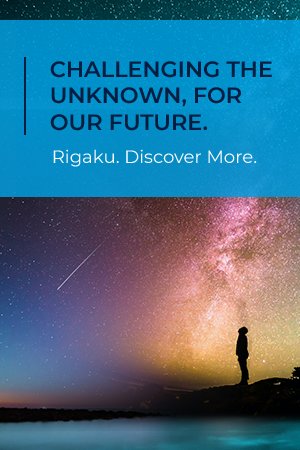 June 10, 2022: Rigaku, a leading manufacturer of X-ray analysis and inspection equipment, has determined the composition of the asteroid Ryugu, providing valuable insights into unlocking secrets behind the formation of our solar system. The results of the WDXRF and thermal analysis studies were published in the prestigious journal Science on June 10, 2022, and will be used as a benchmark for various analyses of the Ryugu sample to be conducted by research groups around the world in the future.

The sample from Ryugu—a C-type asteroid that exists in the asteroid belt closest to Earth and is estimated to be 4.6 billion years old—is the oldest known material ever identified. It was collected by Hyabusa2, a probe launched by the Japanese state space agency JAXA. Hyabusa2 was launched in 2014, returning the sample in December 2020. The asteroid sample is significant as it has not been modified, unlike samples that have landed on Earth as meteorites.

When asked about the project, Dr. Homma said, “Of the 66 elements analyzed by the chemical analysis team, we were able to determine the content of a total of 20 elements, including major elements with percent or greater and minor elements with tens of ppm or greater. The results show that wavelength dispersive X-ray fluorescence spectrometry is a suitable tool for this type of analysis. Elemental composition is a fundamental property, and our data will definitely be necessary for future detailed studies of Ryugu and other asteroid samples. It was a valuable experience for me to be involved in this kind of analysis."

Rigaku also used simultaneous thermogravimetric and differential thermal analysis with gas chromatography mass spectrometry system (TG-DTA/GC-MS) based on a Thermo Plus EVO2 to analyze a 1 mg sample from Ryugu. Results showed that CI chondrites are the most common type of chondrites. The measurements revealed that the water content of a CI chondrite meteorite differs from that of the Ryugu sample. This difference has been attributed to the pristine nature of the Ryugu sample, which has not been modified during its trip to Earth. This means that the Ryugu samples are of great value for space science research, such as the formation history of the solar system and the origin of water on Earth.

Yoshiyuki Sanada, Director and Senior Managing Executive Officer of Rigaku Corporation, commented on the use of Rigaku's thermal analysis equipment in the analysis of the Ryugu sample. “The origin of the elements that make up life on Earth and the origin of water, which was also essential for the birth of life, are hot topics in the fields of earth and planetary science and astronomy, and we are honored to be able to contribute to this important project with our analytical equipment and analytical technology. We are honored to be able to contribute to the achievement of JAXA and other project partners through our analytical instruments and technology.”

The paper, titled “Samples returned from the asteroid Ryugu are similar to Iuna-type carbonaceous meteorites,” can be accessed at https://www.science.org/doi/10.1126/science.abn7850 and the results will be reported at international conferences, including Goldschmidt Conference 2022 (July) and MetSoc2022 (August).