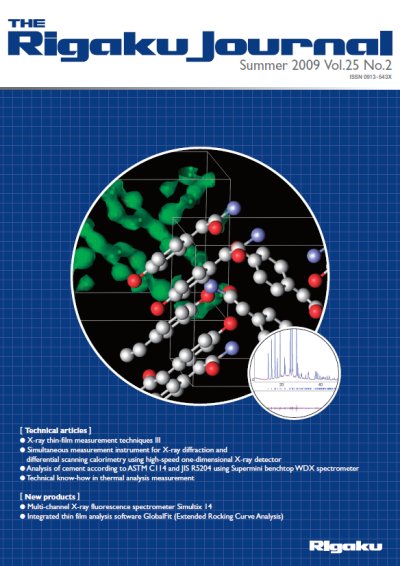 Recently, there are a very large number of electric devices developed in the high-tech industry. Semiconductor material is one of the basic components for these electronic devices. For example, III–V compounds (GaN, GaAs, etc.) are often used to produce optical devices because the band gap range of these compounds are close to the visible light range. These compounds can coordinate band gap making a solid solution with another III–V compound. For instance, GaN can adjust the luminescence wavelength and the refractive index by making solid solution with In or Al. As a result, these compounds can be applied to electronic devices such as blue light emitting diodes, semiconductor lasers, etc.

In the development of these materials, it is important to obtain the correlation between device performances and their physical properties. X-ray diffraction method is commonly used to obtain information about physical properties, including composition and thickness of a thin film and orientation relationship between the film and its substrate.

Two of the most basic semiconductor components in many electronic devices are an epitaxial film and its perfect single-crystal substrate. X-ray dynamical theory can be used to study perfect single-crystal materials. The dynamical diffraction theory is different from conventional X-ray diffraction theory used for the studying of a polycrystalline sample as well as an imperfect crystal. To apply this theory, the conventional X-ray powder diffraction method, which is used for studying polycrystalline samples, is not sufficient, and the high-resolution X-ray diffraction method is required.

In this article, high-resolution diffraction method mainly used for the characterization of semiconductor materials and single crystal substrates is explained.